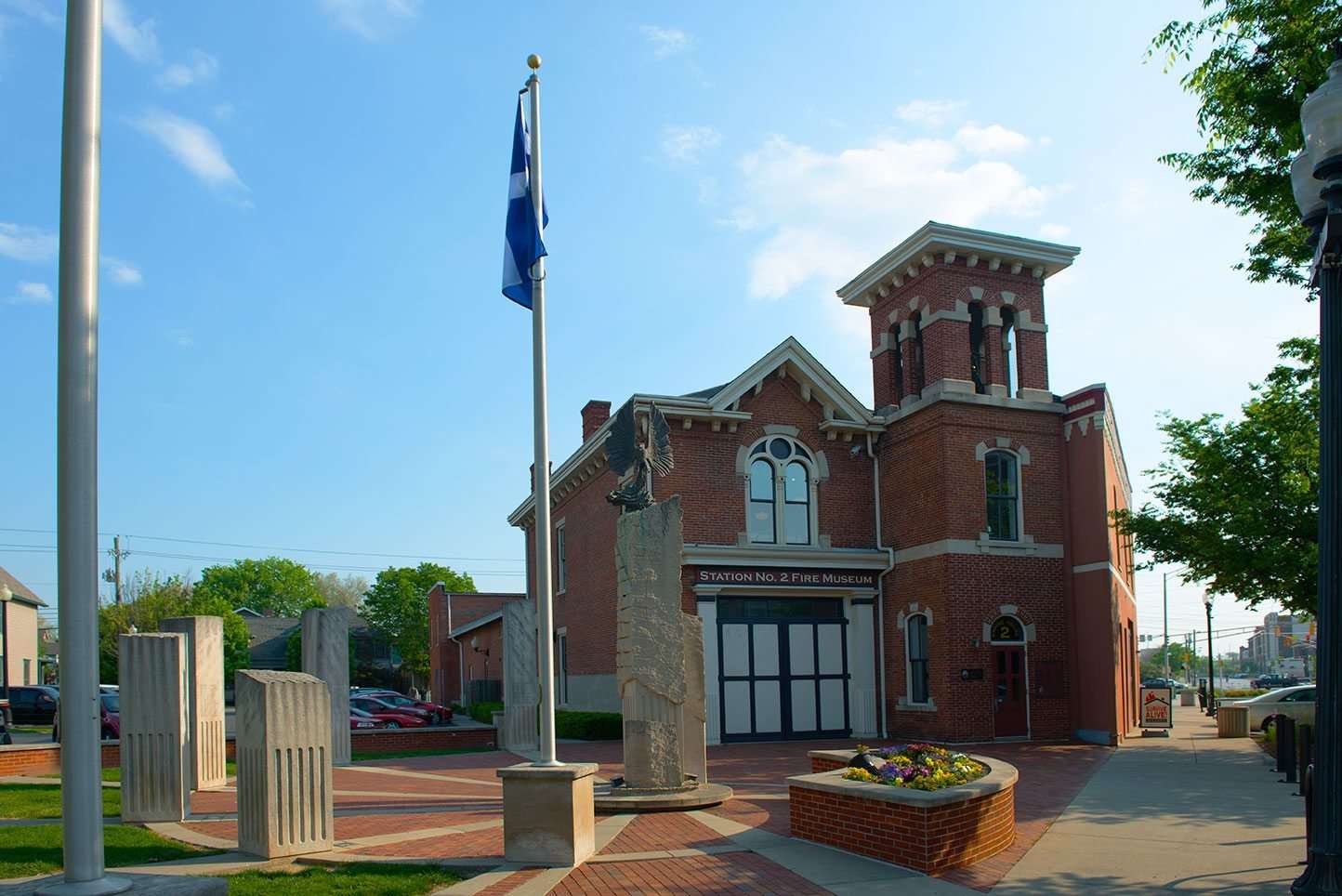 In February, 1992, flames ravaged the Athletic Club in downtown Indianapolis and sent shockwaves through the Indianapolis Fire Department. This tragic blaze claimed the lives of two Indianapolis firefighters and injured several more, one critically.

As the Department and its members struggled with their grief, the healing process was begun in the form of the investigation of the cause of the fire as well as of Departmental policies and procedures. These investigations led to a more structured Incident Command system, better personal protective equipment, new SCBAs, and a wake-up call to the members that no fire is routine.

The healing process is long. A year after the tragedy, the Indianapolis Professional Firefighters Local 416 was looking for a ways to honor the memory of our two fallen brothers and to offer some sense of closure to the membership. It was decided to hold a memorial service. As the plans for this event were being made, it occurred to members of the Executive Board that the Indianapolis Fire Department has had many members who have made the ultimate sacrifice for their fellow man.

And so, in February, 1993, a solemn procession made its way from Fire Headquarters to the Indiana War Memorial located just one block north of the site of 1992’s tragic fire. There, dignitaries spoke of bravery and sacrifice. Then, a rose was placed in a vase for each name from the roll of heroes. As each name was read, a fire bell tolled. When the vase held sixty-eight names, Taps echoed through the auditorium. The event was attended by civic leaders, firefighters, and family members of several of those who sacrificed their lives. One of them, who’s father had died 32 years before, spoke to a member of the Local 416 Executive Board after the service. She thanked the Local for the service, “This is the first time my father’s sacrifice has been recognized publicly.”

This, then, was the genesis of the Marion County Fallen Firefighters Memorial. After two years of planning and fundraising the dream was realized. The Memorial was dedicated on July 26, 1996. The list of names had grown to seventy-one as the concept was expanded to include all of Marion County. 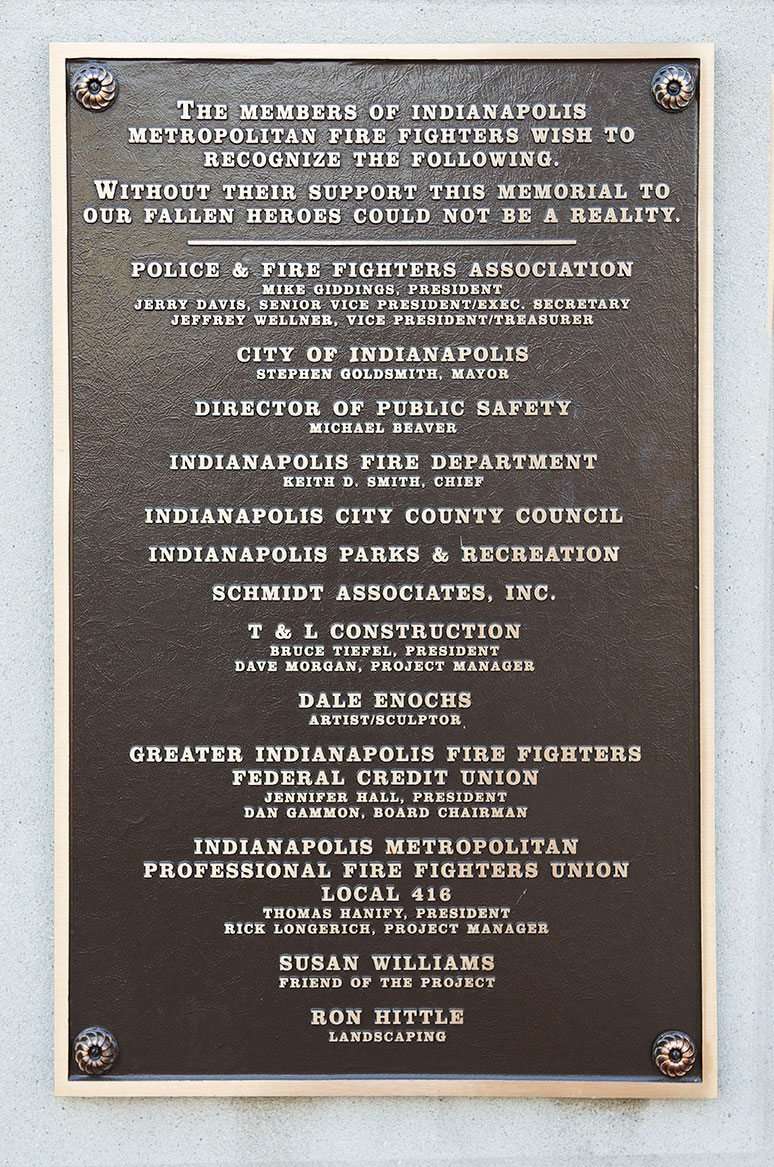 List of some of the those who helped realize Memorial Plaza

The Memorial sits in front of the Local 416 Union Hall. This is housed in the oldest standing firehouse in Marion County. The Memorial consists of five descending columns that spiral out from the front of the firehouse to the centerpiece column. On each column are inscribed the names of our fallen heroes. Atop the center column sits a Phoenix, the mythical bird of fire. Just as it rises from its ashes, so too do the souls of our heroes, drawn upward to heaven. 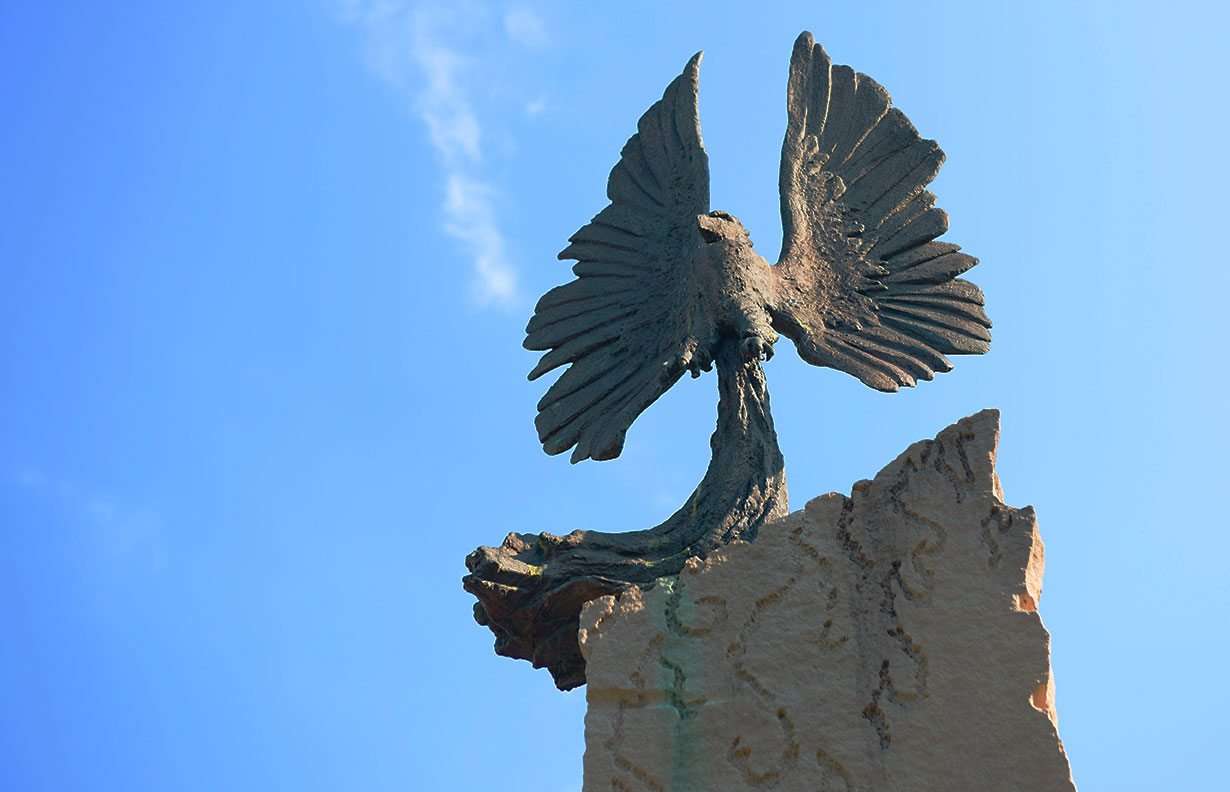 The Phoenix pointing up toward the heavens to memorialize our fallen members.

Local 416 has expanded since the dedication. It now represents over 2600 active and retired firefighters from 25 Indiana departments. It is a vibrant, growing organization just as the Indianapolis Fire Department is under its current leadership. The Local is working for a bright future for all its members. To be truly successful in the future, we must always remember the sacrifices of the past. One way we do this is to honor those that have made the ultimate sacrifice. 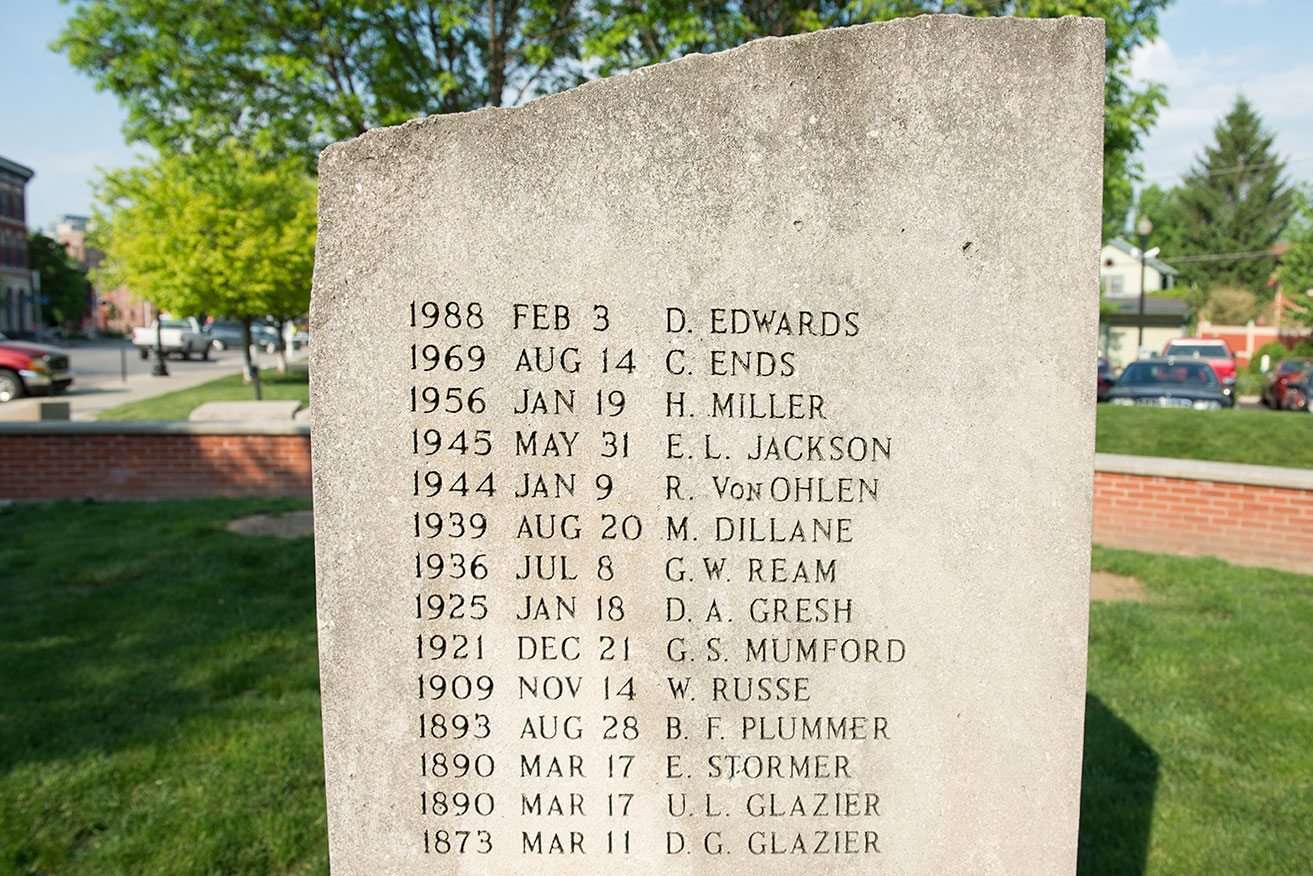 One of five stone columns in Memorial Plaza that show the names of fallen members of Indianapolis Professional Firefighters Local 416.

This Memorial is located near the Statehouse Building.

The fire began at 3:08 PM on this memorable St. Patrick’s day in 1890, volumes of smoke rolling up from the basement of the Bowen-Merrill book house, where great quantities of paper were stored, attracting the attention of passersby as it came through the grating to the sidewalk. The loss of property to this and adjoining establishments exceeded $200,000, the Bowen-Merrill loss being $87,224; that of H. P. Wasson & Co. and others does not appear. It is pathetically significant that the record of this fire is incomplete in the books at Department Headquarters. The clerk who kept, and still keeps, the record was unconscious under the fallen wall, with dead and dying comrades around him. He fortunately escaped with his life, after hovering for months on the brink of death. This break in the record remains as but one of many reminders of the great disaster.